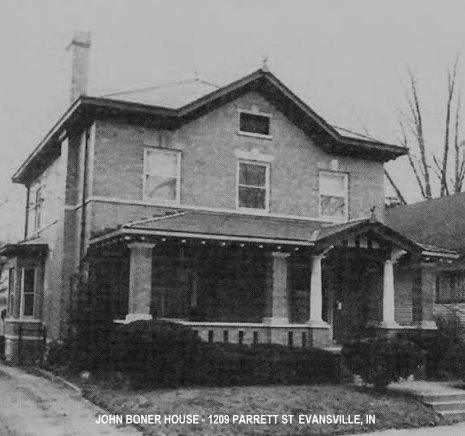 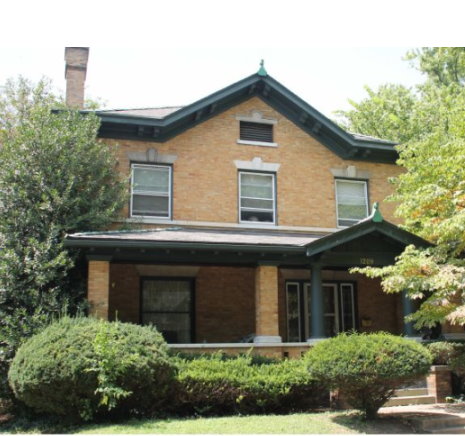 In 1910, Columbia University trained architect Frank Ingle gave John Boner and his wife Elizabeth an outstanding example of an American Four-Square house. Typical of this style, what we have here is a two story, hip roofed house of rather square dimensions with a porch across the front. Special architectural embellishments set this house apart. Observe the slate roof with the green oriental flairs at the peaks. Broad eves are expected with this style, but this house also has bold, Italianate inspired brackets supporting this overhang. In addition, the beautiful stain glass sidelight pulls the front entry out of the ordinary.

John Boner ran a jewelry store on Main Street from the end of the nineteenth century until the middle of the Great Depression. He also made automobile history in Evansville. Boner had the distinction of driving the first automobile on the streets of Evansville. In 1899, he and E. K. Ashby purchased a vehicle with an eye to establishing a taxi business. People were curious enough to want to ride, but the undependable motor and frequent stops to calm frightened horses and appease the angry horsemen caused their venture to “flop.” The auto-taxi business a failure, Boner joined Ashby in the first car dealership in Evansville. Ran as a part of Ashby’s bicycle shop, they also sold such “new-fangled” things as “talking machines.”

Text Courtesy of the City of Evansville


Back to The Evansville Boneyard