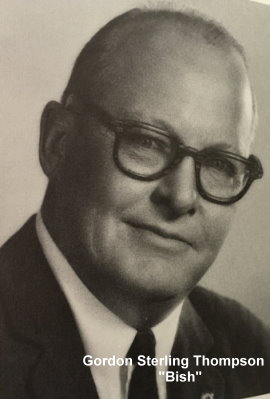 When “Bish “ Thompson received the coveted Scripps-Howard Ernie Pyle Memorial Award in 1957, the judges paid tribute to his journalistic skill with these words: “He rings the bell almost every day, writing with gentleness and an eye for interesting detail, and a warmth that characterized Ernie Pyle at his best.”

Bish speaks, as he writes, of his faith in the younger generation, the Civil War, steam locomotives, his basement workshop, his books, his many interesting friends, his family…but mostly about people…with an engaging and rewarding philosophy generously laced with humor, and a deep understanding of the foibles of mankind.

He was born in Chattanooga, Tennessee on August 8, 1913, the son of a Methodist minister, thus the nickname “Bish,” a contraction of bishop. In 1935 he was graduated from Baker University in Kansas, a night editor in Vincennes, a city editor in Lawrenceville, in 1934 he became associated with the Evansville Press. Ten years later, he began his feature column, which was to bring him national acclaim.

In addition, Bish conducted a daily radio broadcast in Evansville since 1947, dealing with his stirring and unusual observations on life. He was also narrator to the Evansville area, of a weekly television program, which enjoys a large and loyal audience from the three states in the lower Ohio Valley into which it spreads.

With all his perspicacity and talents he became one of the nation’s most prominent and refreshing lecturers, finding time to address more than one hundred audiences yearly at conventions, banquets, universities, commencement exercises, and such, always with wholesome philosophy, and decent down-to-earth good humor.

As a businessman he was a board member of Franklin National Life Insurance Company, Charter Underwriters and Management, Inc., and on the advisory board of Southern Securities Corporation.

He has been a steward of the Trinity Methodist Church, president of the Methodist Men, is a Mason and a Shriner, and a life member of Delta Tau Delta fraternity.

He was married to the former Margaret Terhune, of Kansas City. They had one daughter, Mrs. Thomas E. (Ann) Lynch, of Las Vegas, Nevada, a son Gordon Terhune Thompson. Bish Thompson died in 1980.


Bish's son , Gordon passed on Monday, January 9, 2017 at his home in Manhattan. He was born in Evansville, IN on March 3, 1947. A graduate of Wabash College and the Columbia Journalism School, Gordy began a long career at The New York Times in 1968, where he met his wife, Nora Kerr. Among the positions he held in the newsroom were copy editor, editor of the L.I. Weekly, assistant Metro editor, Real Estate copy chief, and assistant News Technology editor. Moving to the Systems Department in 1992, he became Manager of Internet Services in 1994, after helping connect The Times to the Internet

Back to The Boneyard